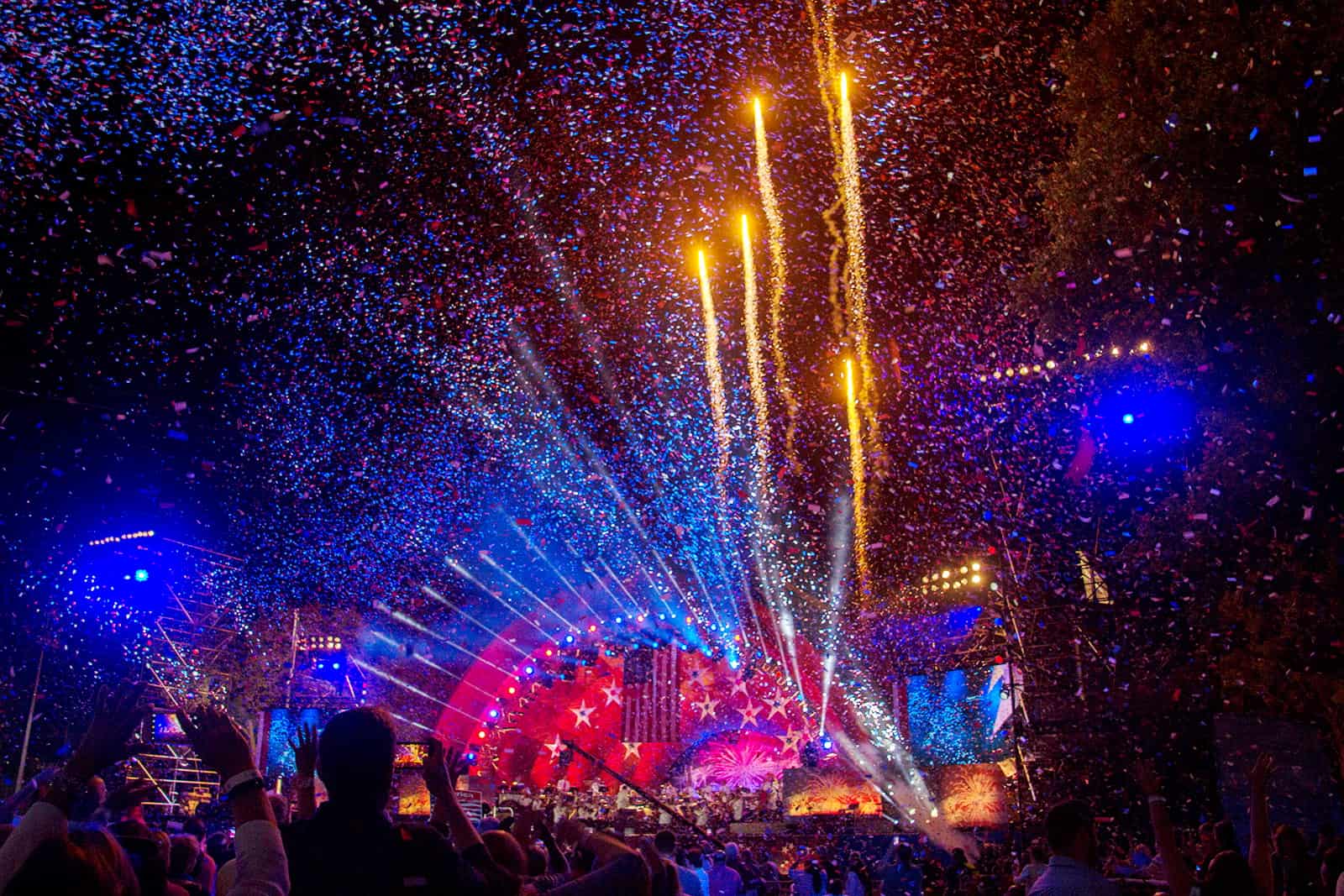 Boston throws one the biggest party in the nation for the 4th of July. The festivities begin on Thursday, June 28 this year and last through late Wednesday night, July the 4th with one incredible concert and fireworks show at the Hatch Shell along the Charles River.

The Boston Pops Fireworks Spectacular is the big event for the long weekend. It will take place on Wednesday, July the fourth. The concert begins at 8:00 pm, and the gates open at 9:00 am. The fireworks are scheduled for 10:30 pm and the show is expected to wind up at 11:00 pm. The concert and the fireworks are free. Admission is regulated only by how many people can be admitted to the park on a first come and first served basis. The secured areas on the island and on the oval require that your bags be checked and that you receive a wristband. Once these two areas are full, no one else is allowed in.

Parking is available at several public parking garages, but the organizers encourage all visitors to take public transportation to the event. Handicapped parking is also available. Food vendors and food trucks are on hand. There is free water available and there are plenty of public portable restrooms.

There is a special fundraiser barbecue that runs in conjunction with the concert and fireworks, run by the Community Boating Association. The event features a disc jockey and live radio broadcast, huge jumbotrons to watch the concert, face painting, glitter tattoos, a photo booth, one great view of the fireworks with spacious seating and a cookout with hamburgers, sides, salads, smoothies and Ben & Jerry’s ice cream. It is held at the boathouse located on the Esplanade between the Hatch Shell and the Longfellow Bridge. The event opens at 5:30 pm. Prices range from $50.00 and $250.00. Get more information on the BBQ here.

Concert with all musical guests and the Pops in a rehearsal concert. Gates open at 5:00 pm. The concert begins at 8:00 pm and wraps up at about 10:00 pm. This event does not include fireworks. (Please note, there were limited fireworks, streamers, and confetti at the rehearsal concert a few years back when we attended)

Concert with all musical guests and the Pops in a rehearsal concert. and fireworks. The gates open at 9:00 in the morning for visitors to claim the best seats. The concert begins at 8:00 pm. The fireworks begin at 10:30 pm and the event ends at approximately 11:00 pm.

Here are the complete details of the event from the Pops website:

The headliner for the 2018 Boston Pops Fireworks Spectacular, under the direction of Keith Lockhart, is Daytime Emmy Award-winning, quadruple platinum-selling recording artist Rachel Platten, who grew up in Newton Centre, Massachusetts. Ms. Platten’s hit release, “Fight Song,” topped multiple charts worldwide with its release in 2015, and her 2016 album Wildfire was certified gold by the Recording Industry Association of America. In addition, the Boston Pops is also pleased to announce two Grammy award-winning artists who will be featured during the event: American musician and recent MacArthur Grant recipient Rhiannon Giddens, the lead singer, violinist, banjo player, and a founding member of the acclaimed country, blues, and old-time music band Carolina Chocolate Drops, and the Indigo Girls, the folk music American duo featuring singers Amy Ray and Emily Saliers, two of the most successful singer-songwriters of their generation.

The Boston Pops Fireworks Spectacular on July 3 (concert, 8-10:30 p.m.) and July 4 (concert and fireworks, 8-11 p.m.) will mark the first performances to take place in the renovated Massachusetts Department of Conservation and Recreation’s (DCR) Hatch Memorial Shell on the Charles River Esplanade.

The 2018 Boston Pops Fireworks Spectacular—one this country’s largest and oldest public Fourth-of-July events and one of the biggest annual outdoor concerts anywhere in the world—will also pay tribute to the legendary American musician Leonard Bernstein (1918-1990) as part of an international celebration marking the centennial of his birth. The Pops is very happy to announce that the legendary singer/actor/dancer Rita Moreno, who played the role of Anita in the film adaptation of Leonard Bernstein and Stephen Sondheim’s groundbreaking Broadway musical, West Side Story, will make a special appearance on the July 3 and 4 performances in honor of the Bernstein centennial tribute. Recipient of the Academy Award for Best Supporting Actress for that role, Rita Moreno is one of only twelve artists to have won all four major annual American entertainment awards, including an Oscar, an Emmy, a Grammy, and a Tony. The five musicians of this all-female guest artist lineup—Moreno, Platten, Giddens, Ray, and Salier—will all be making their debut with the Boston Pops. The program will also showcase members of the Tanglewood Festival Chorus, the official chorus of the Boston Pops and Boston Symphony orchestras.

In addition to the 2018 Boston Pops Fireworks Spectacular broadcast on Bloomberg TV, Bloomberg Radio, and Bloomberg.com, 8-11 p.m., digital stream access will expand to include globe.com
and boston.com, two of the largest and most successful news information websites in the country—with 9 million unique visitors monthly. Bloomberg.com, which broadcast the live stream last summer, will also be joined by bostonpopsjuly4th.org, adding yet another option for viewing the show online. Also new in 2018, a major viewing screen will be mounted on the Rose Kennedy Greenway, adding an additional public viewing site for the event. Details about the many ways to tune in to the live concert broadcast, including additional radio options and mobile phone video streaming capability, are outlined below. In addition, the Boston Pops Fireworks Spectacular App for iOS and Android devices, introduced in June 2017 and providing up-to-the-minute detailed event, broadcast, and schedule information, will be available in early June.

Mark Volpe, BSO Managing Director: “The Boston Pops Fireworks Spectacular is one of Boston’s proudest moments each year and represents an amazing example of multiple forces throughout the city and state coming together to produce one of the largest public concerts to take place anywhere in this country or throughout the world. That is why it is exceedingly gratifying to know that the concerts on July 3 and 4 give back to the city and state by generating an estimated $23.1 million increase in economic activity for the City of Boston and $15 million for the Commonwealth of Massachusetts. We are all incredibly fortunate to be part of this singular annual celebration, absolutely unique to the city of Boston and its appreciative citizens.”

Thomas E. Faust, Jr., Eaton Vance Chairman & CEO: “Eaton Vance is pleased to once again support the Boston Pops Fireworks Spectacular as Presenting Sponsor. This cherished Boston institution remains the foremost annual celebration of our nation’s founding values, a musical and entertainment extravaganza without peer. Our support exemplifies Eaton Vance’s commitment to giving back to the communities in which we live and work, and the special place this one-of-a-kind event holds in the hearts of its millions of fans.”

Where to Tune in

Radio listeners in the greater Boston area can hear the concert through Bloomberg’s flagship stations in Boston and Newburyport on 106.1 FM / 1330 AM / 1450 AM/ 92.9-HD2, and via expanded coverage this year on 99.1 WPLM-FM (Plymouth, MA) covering Boston’s South Shore, Southeastern Massachusetts, Cape Cod and portions of Rhode Island. Nationally the concert can be found on SiriusXM channel 119, online at bloombergradio.com, and via mobile on the Bloomberg and iheartradio apps.

The Boston Pops Fireworks Spectacular App for iOS and Android devices, introduced in June 2017, is scheduled to be available in early June. Boston Pops Fireworks Spectacular App users will be able to stream the concert on their smartphones. The app will also provide up-to-the-minute detailed event, broadcast, and schedule information. Information for those attending the event—such as what to bring with them, commemorative camera filters for photos, an interactive map with tags showing points of interest on the Esplanade, including information about merchandise, food and beverage, and entry gates, are among the highlights of the app.

On July 4, gates open at 9 a.m. and the Boston Pops Fireworks Spectacular concert begins at 8 p.m., followed by the event’s fireworks display at approximately 10:30 p.m. On July 3, the gates open at 5 p.m. and the performance begins at 8 p.m.;there will be no fireworks on July 3. Concert attendees of the event can ride the MBTA for free after 9:30 p.m. on July 4. Complete details can be found at bostonpopsjuly4th.org.

The live broadcast will be produced by Michael Mathis, a multiple Emmy Award-winning producer and writer with more than 25 years of experience creating, developing, and producing telecasts and special events and who has produced the broadcast for many years. Mr. Mathis’s recent video projects include Christmas in Rockefeller Center and The Nobel Peace Prize Concert. Joining the production team for the second consecutive year, Sandra Restrepo Considine will take on the role of director of the telecast. Among her many prestigious accomplishments, Restrepo Considine directed the first live televised musical performance of Lin-Manuel Miranda’s Broadway sensation “Hamilton” during last year’s Grammy Awards and MTV’s weekly, live music series “Wonderland”; she also served as show director for more than 250 episodes of ABC’s “Jimmy Kimmel Live!” The Boston Pops Fireworks Spectacular was created by David G. Mugar.

One of the country’s premier Independence Day celebrations—which annually draws a crowd of more than 400,000 people to DCR’s Hatch Memorial Shell located on the Charles River Esplanade—carries on in the tradition of founders Arthur Fiedler (Boston Pops Conductor, 1930-1979), who initiated the free Esplanade Concerts in 1929, and David Mugar, who revitalized the tradition with fireworks and cannons in 1974, and a flyover added in 1995. Over the years, this free concert and fireworks extravaganza has attracted not only the people of Greater Boston, but also millions of visitors to our great city. Under the auspices of the Boston Pops, longtime Boston Pops Fireworks Spectacular Executive Producers Pamela Picard and Richard MacDonald continue to manage the planning and operations of the event. The Boston Pops is honored that Mr. Mugar has taken on an advisory role. Following the protocol of all recent Fourth of-July celebrations, the Boston Pops is working closely with local and state officials on all aspects inherentto the success of the event. For a brief history of the Boston Pops July 4 celebration, click here.

Eaton Vance is a Boston-based, leading global asset manager whose history dates back to 1924. With offices in North America, Europe, Asia, and Australia, Eaton Vance and its affiliates Parametric Portfolio Associates, Atlanta Capital Management, Calvert Research and Management, and Hexavest offer individuals and institutions a broad array of investment strategies and wealth management solutions. The Company’s long record of providing exemplary service, timely innovation, and attractive returns through a variety of market conditions has made Eaton Vance the investment manager of choice for many of today’s most discerning investors. For more information, see their website.

Bloomberg, the global business and financial information and news leader, gives influential decision makers a critical edge by connecting them to a dynamic network of information, people and ideas. The company’s strength – delivering data, news, and analytics through innovative technology, quickly and accurately – is at the core of the Bloomberg Professional service. Bloomberg’s enterprise solutions build on the company’s core strength: leveraging technology to allow customers to access, integrate, distribute and manage data and information across organizations more efficiently and effectively. For more information, visit their website.