You can celebrate First Night Cape Cod in many ways this weekend. Three different Cape communities ring in the new year in very different ways.

Sandwich First Night is known for its reveler’s parade and its lighted giants. The giants are large light sculptures that are set up in town during the holiday season. In Chatham, there are two different fireworks displays. There’s an early one for the kids and another one at midnight that accompanies the dropping of the Countdown Cod. In Provincetown, the celebrating goes on for days and concludes with the only fireworks display on New Year’s Day. The Sandwich and Chatham festivities are traditional non-alcoholic First Night events and the Provincetown one is not.

First Night Sandwich celebrates its fifth year in 2017. The festivities begin at 4:00 pm on Saturday, December 31, 2016. This family-friendly event is a non-alcoholic celebration of the arts. Some of the performances include Mamadou, a five piece African band playing at town hall, The Green Briar Nature Center puppets at 1st Church, and Woodhall/Jackson Folk Music at C.W.’s. You’ll also find the Cape Cod Guitar Ensemble at Sandwich Glass Museum, Vernon Parris Steel Drums at the library, and the Highland Light Scottish Pipe Band at the Masonic Lodge.

There will also be ice sculptures, a children’s ice skating rink, lighted giants in the village and along Route 6A, children’s crafts, a fairy garden, and a Resolution Wall. The Reveler’s Parade starts at 8:00 pm. Lineup begins at 7:00 pm at Wing School. The parade route winds through town and ends up at First Church and Shawme Pond. The night concludes with the fireworks display over the pond. The finale features the lighting of the giant sea creature sculptures, a cannon firing and a fireworks display on Shawme Pond.

First Night Chatham is celebrating their twenty-sixth year on December 31, 2016. The fun begins at noon and continues till dusk when the fireworks go off at Veterans Field. The event celebrates the arts and culture of the region and takes place at locations all over town. Early highlights of the festivities include an annual town photo that is taken at the Chatham Lighthouse, a bubble wrap stomp, and a Carnival Caper costumed road race. There’s also a concert with the Cape Cod Jazz Quartet at the Orpheum Theater, miniature golf at the Community Center Gym, Bradley James at the Congregational Church, Keltic Kids at St. Christopher’s Chapel. You’ll also find Cirque du Jour at the Middle School Large Gym, Chinese Folk Dancers at the Middle School Auditorium, Ryder Martin’s Fabulous Trains at Atwood House Museum, and Horse Drawn Wagon Rides at Town Hall. Later in the day, there is a Noise Parade, early evening, low-level fireworks at Veteran’s field for children that can’t wait till midnight, and finally the Countdown Cod and fireworks on Oyster Pond at midnight. 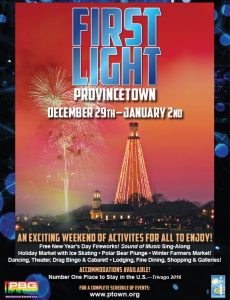